A fresh take on a well-loved tale

Our Beauty & the Beast harks back to mythical beginnings. The Spirit of the Moor transforms the angry young man who threatens her terrain into a hideous monster. It will take someone adventurous, someone with courage, to help him redeem himself.

“The whole show from start to finish was totally enchanting. My children and I all thoroughly enjoyed it. The age ranges of my children are from 5yrs old to nearly 11yrs and they all totally loved it, as did I.”

The production works within Covid restrictions to to provide an inclusive communal experience. Singing the local anthem together may be out - but signing it together is definitely in! The audience creates simple props before the story starts that enable everyone to be part of the action at key moments.

Children and adults alike enjoy both the bravura and the mischievous fun of the storytelling and the genuine drama and pathos of the tale as it unfolds. The production boasts an impressive set and good-looking costumes created by Natalia Riga and a wrap-around sound and music design plus atmospheric lighting from Peter Buffery.

“A fabulous performance of Beauty and the Beast in Swimbridge Jubilee Hall, and the sound and props were stunning - we loved it all. The audience did too. Thank you again for giving us the opportunity to have this event - it was a magical treat”

The production is for children aged 5+ and their families.

Two story-tellers ask everyone to help with the story they’re about to tell by making a tree out of old newspaper! They explain that the village’s famous song was going to feature in the story too – but because of Covid they’re not allowed all to sing together. So the storytellers teach everyone the special sign language that the village devised during an outbreak of plague when they too were'nt allowed to sing together The storytellers explain that the story took place in the village 400 years ago. And also up on the nearby moor - where a rich young man decides to cut down all the trees to build battle ships. The  the Spirit of the Moor is awakened and warns him not to chop down all the beautiful trees. He ignores her warning.

Meanwhile a rich man, fallen on hard times, has moved to the village with his three daughters. His elder daughters, Esme and Clotilda, blame him for their misfortune but his youngest daughter, Beauty, tries to cheer him up by singing the village anthem with him.

A Messenger arrives with a letter telling Father that two of his ships have escaped the storms and that he's rich again. Beauty readies her father and their horse, Grayling,  to travel across the moor to the Big City - to claim the money. The Messenger offers to accompany Father across the moor. Esme and Clotilda ask Father to bring them back expensive outfits, but Beauty just asks for a white rose.

Father is away much longer than Beauty expects. When he does return, she runs to open the door for him. Father howls in despair when he sees Beauty but can't find the words to tell her why. She helps him focus his thoughts and he explains what happened.

The journey across the moor was fine. But most of the goods were spoilt and there was no money left from the ship. As he prepared to return home he discovered that Grayling, was in fact a talking horse! On their journey back through the snow, high on the moor, a sudden howl made Grayling rear and gallop away leaving Father on his own. Father saw a distant light which led him to a mysteriously empty castle that seemed to be built of living trees! Grayling was there, happily munching on fresh oats, but she told Father that there appeared to be no-one else around. Father started to have some food and drink he found laid out on a table but was suddenly overcome with tiredness and fell fast asleep. In the morning, just as Father was about to set off again, he saw a white rose bush – although he couldn’t afford the expensive outfits his elder two girls had wanted he decided that Beauty should have the rose she asked for. As he plucked the rose a huge and ferocious Beast appeared roaring at him, telling Father that either he must stay there as punishment for trying to steal the rose or he must send in his place the first living creature he sees when he reaches home. That first living creature turned out to be Beauty.

So now Beauty has to go the Beast’s castle. She sets out determined not to be afraid and is happy to find Grayling there. An exquisite cloak mysteriously appears on her shoulders. Beauty wants to see how it looks in a mirror. But the castle walls whisper that mirrors are not allowe . The Beast joins Beauty for supper and although she is, at first, frightened by the Beast he asks her to dine with her each evening and answer a question truthfully: the question is ‘Can Beauty love him’? Beauty says she will dine with him but that the answer to his question is ‘No’.

Meanwhile, back at home, Esme and Clotilda are making Father’s life miserable. They flounce around demanding cups of tea whilst he has to do ALL the housework. They plan a party to cheer themselves up.

Beauty is lonely in the castle, although it is beautiful and full of wonderful things, because she has no-one to talk to and she misses her family. The Beast continues to ask her each evening if she loves him and she always answers no. She wants to know why he has to ask this question. He won’t tell her. But she grows more and more comfortable with the Beast and dances with him and sings to him and realises that he loves her. However, she tells him that although she is fond of him, she doesn’t think she’ll ever love him.

Then one day whilst exploring the castle Beauty finds a magic mirror. Intrigued she looks into the mirror and sees not herself but her father who appears to be dying. Her sisters have been so cruel to him that he is now very frail and ill. She wants to go home but the Beast says he will die from loneliness if she goes. But Beauty promises to return to him within seven days. And Grayling rushes her home.

Beauty gets back to Father in time to save him. Although Esme and Clotilda are very cross that Beauty is back they think that if they make Beauty stay longer than the seven days she’s promised then the Beast will be so angry with Beauty he’ll do something awful to her – which they think is an excellent idea. So they devise all sorts of nice things to do to make Beauty stay. And their trick works, Beauty begins to forget the Beast.

Until one night there is a knocking at her window and a voice tells her to look into the mirror. Beauty sees the Beast slumped in his chair as if dead. She tells her father that she has to go immediately. She flies to the Beast on Grayling. Beauty hugs the dying Beast and tells him that she loves him.

The Beast is immediately transformed into a young man. Beauty is horrified because she has fallen in love with the Beast but eventually she comes to understand that the young man was the Beast whilst under the spell of the Spirit of the Moor who had transformed him into a Beast as a punishment for chopping down the forest. The Spirit decreed that only if someone loved him for himself and not what he looked like on the outside would the spell be broken. And Beauty has done just this.

The storytellers reveal that they in fact are Beauty and the Beast and that after the happy ending they sailed away to make new stories of their own – but have come back to the village, as so many people do, particularly at Christmas time, to share the story and sing or sign (!) the village song which everyone does for one last time. 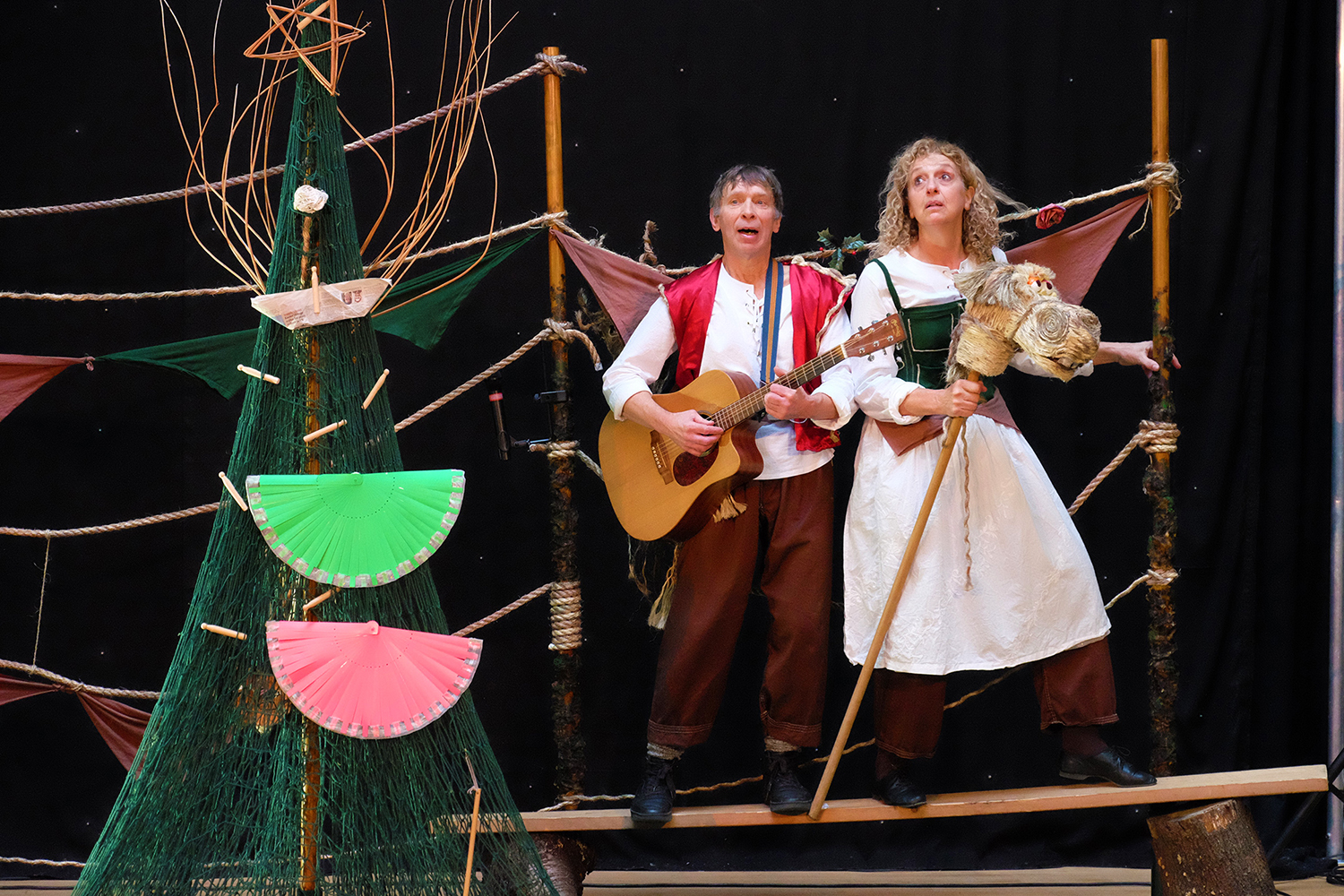 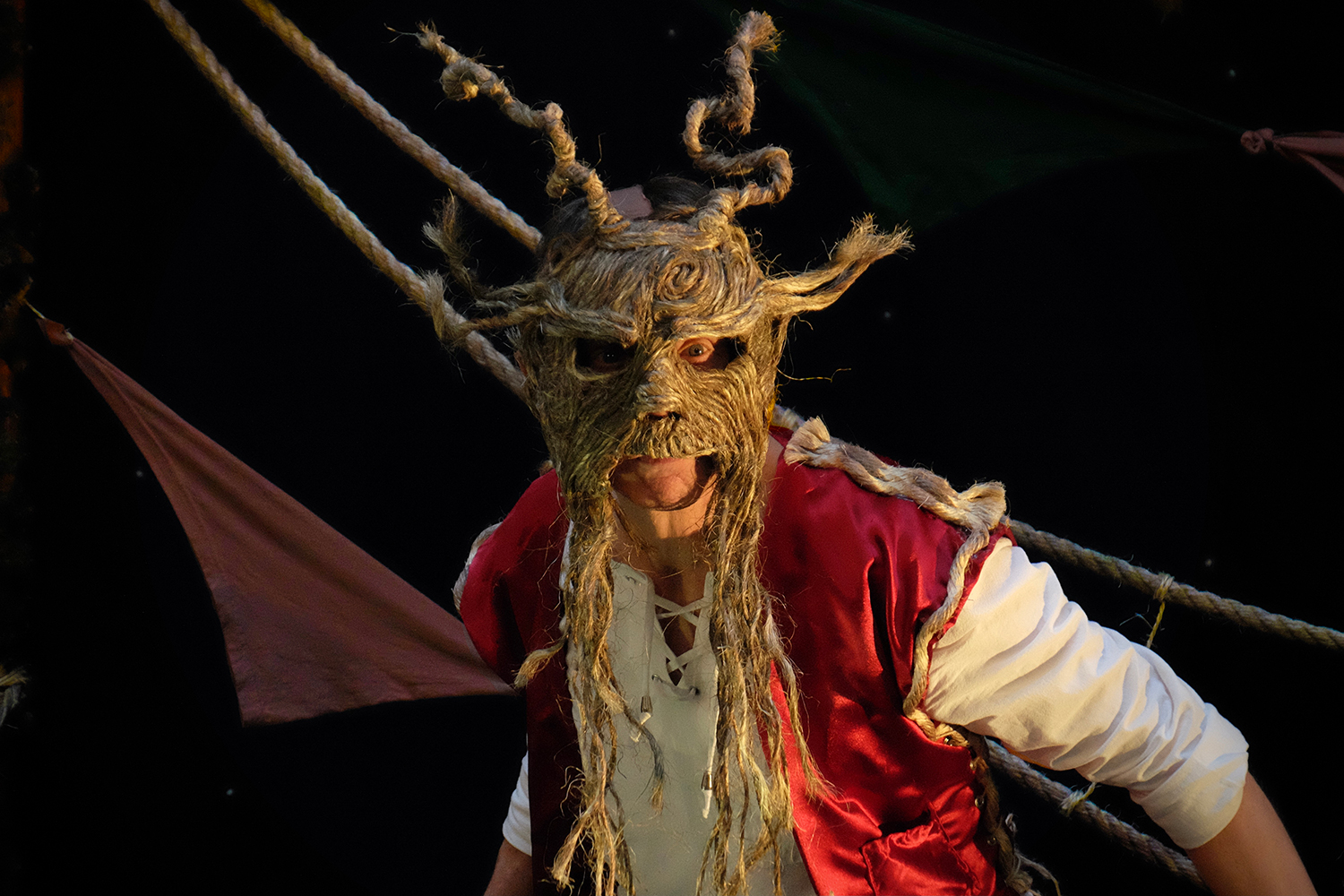 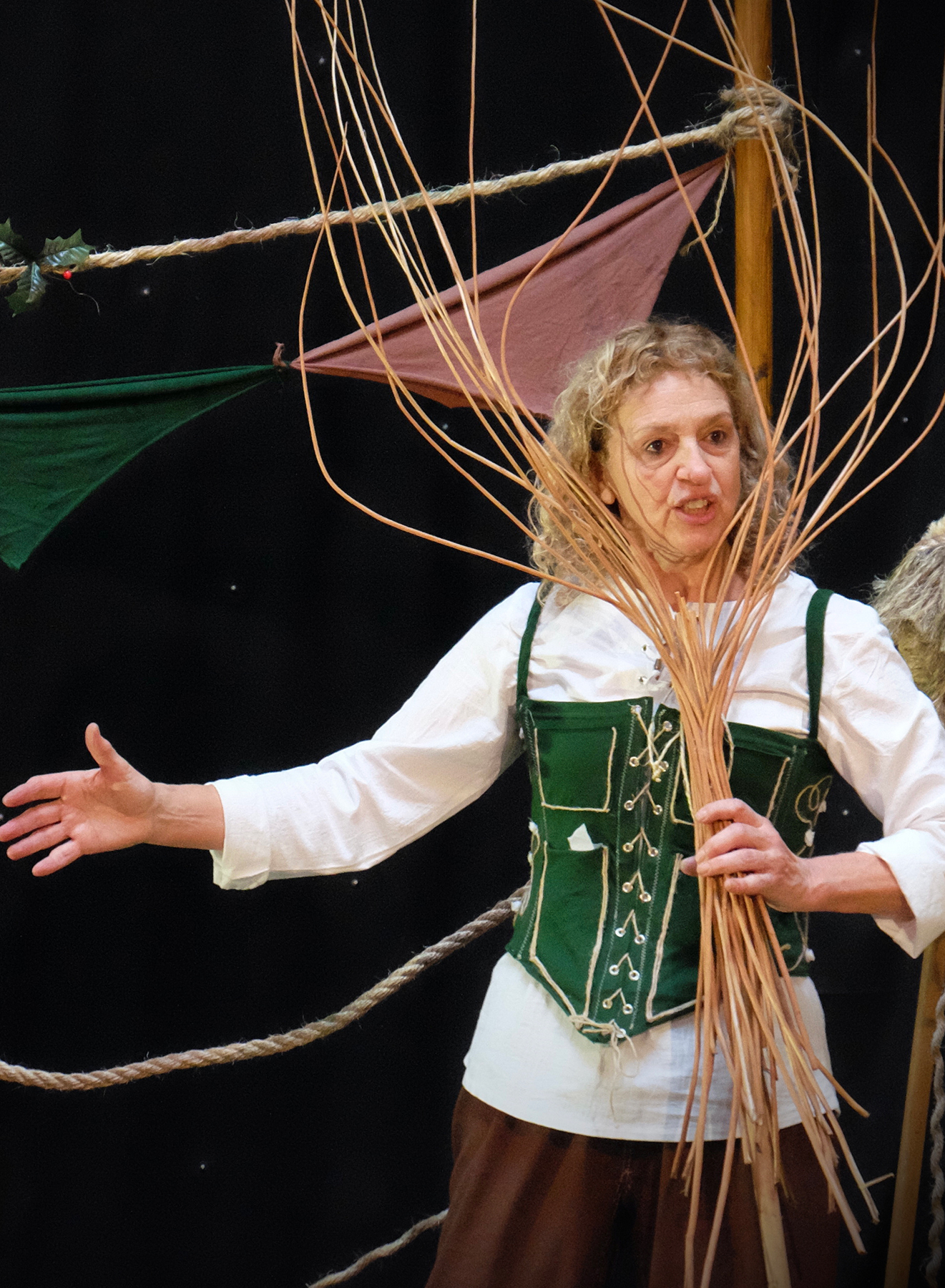 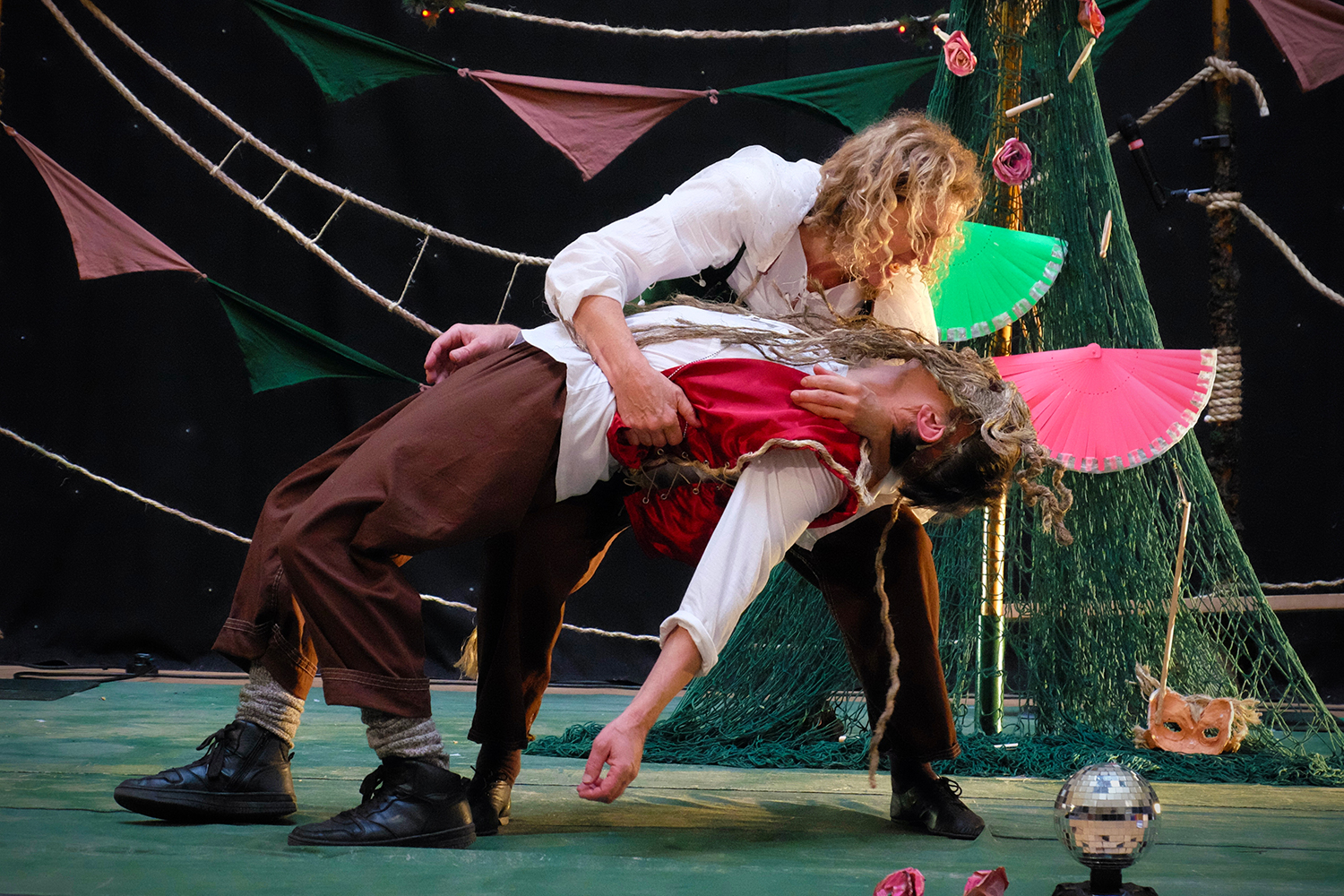 Multi Story's version of Beauty & the Beast harks back to mythical beginnings. The Spirit of the Moor transforms the angry young man who threatens her terrain into a hideous monster. It will take someone adventurous, someone with courage, to help him redeem himself.

Children and adults alike enjoy both the theatrical bravura and the mischievous fun of the storytelling and the genuine drama and pathos of the tale presented by one of the UK's most respected children's theatre companies.